How did you find the Diamond Approach?

My mother and stepfather were part of a Gurdjieff group in England when I was in my teens, so I knew that there was such a thing as a spiritual work school. At the time, I wasn’t particularly interested, even though I participated in some of the activities and spent many weekends at the manor house where the group met. Partly I wasn’t interested because the group was very secretive about its teachings. They were only supposed to be for people with enough life experience. Also, I was put off by my mother’s attitude. She was a true believer, and seemed to think the Gurdjieff work was THE work, and there was nothing else like it. Surely, I thought, there must be other paths with similar ideas.

After I left home, I more or less forgot about it. It wasn’t until my marriage was in trouble and I sought psychological help that the idea of the Work resurfaced. My therapist was knowledgeable about the Enneagram. I knew my mother had given a talk on the Enneagram in her Gurdjieff group. So I found myself, almost to my own surprise, saying to my therapist that I was interested in learning about the Enneagram, and also in finding something like the Gurdjieff work, but different. The way I wanted it to be different, I realized later, was that I wanted it to be kinder and more tolerant. I had found the atmosphere in my parents’ group to be harsh and judgmental sometimes.

I found it incredibly exciting to learn about the Enneagram. I felt it was giving me answers to questions I had always had, but didn’t know I had. Finally I was being initiated into some of the secrets my parents’ group had withheld.

My therapist also guided me to the Diamond Approach. One day, I saw the book Essence with the Elixir of Enlightenment, on his desk. “This is the best,” he said. I read it almost without stopping. I was completely on fire. It was exactly what I had been looking for, searching for, longing for, my whole life, without even knowing that I was looking. It opened the door to a realm of experience beyond my wildest imaginings. And it had the ring of truth. Every word resonated deep within.

When you first started, what was your greatest challenge?

There were several. In my very first retreat, I was stunned by the impact of my superego. I had had no idea how much it weighed me down. I felt as if I was under a heavy steel table, with its surface lying directly on top of me.

I was also surprised by how deep and extensive my feelings of rejection were. I had barely been aware of them before. It was very painful. But I also welcomed the pain, which led to the grace of my heart opening.

But the biggest challenge was my struggle with not knowing. I had always done well in school, and been seen as intelligent. That was the first thing that really differentiated me from my twin, so my identity was tied up with it. Suddenly, my greatest asset felt like a liability. When my mind went blank, I would feel blindsided and dumb, and would scramble to find something, anything, to say. It took me a long time to realize that my struggle with not knowing had to do with survival fears. I had used my mind as a support, literally as a way to survive, to exist.

And the long struggle was worth it, as it unquestionably helped me to develop my own capacity for direct knowing.

What has kept you engaged with the Diamond Approach teachings?

The teachings continue to resonate with me, deep down. When I first heard the teachings, every word felt true. And my own experience has borne that out.

Until I started teaching, I would read a chapter in one of Hameed’s (A. H. Almaas, the founder of the Diamond Approach) books every morning before I meditated. It kept the teaching alive for me every day. And, as a bonus, it has given me a solid grounding in the details of the teachings.

Now I continue to immerse myself in the teachings in a different way, as I prepare to give talks. I find I need to know the teachings at a whole new level in order to teach them. And the learning doesn’t stop there. I also need to deal with whatever obstacles in myself come up as I prepare to teach. It can be fascinating to find out what is still in the way of my integrating a particular teaching. I remember how surprised I was when I first gave a talk on spontaneity. I couldn’t understand why I suddenly felt so self-conscious. I thought I had left that behind. Then I realized that, of course, self-consciousness is a specific barrier to spontaneity.

What aspect of the teaching is most alive in you right now?

Whatever I am preparing to teach is usually very alive for me, complete with obstacles.

I find there is palpable pleasure in very ordinary, every day activities, as well as in simply living, and in living simply.

I find the teaching about objective sorrow very touching. There is something so human in being able to keep my heart open when there is suffering, regardless of whether it was caused by me or by others. There is beauty as well as pain in the sorrow. It feels very pure, and healing.

What has been the most surprising discovery for you?

I keep feeling surprised and moved by all the astonishing ways that students transform, and keep transforming. It is such a tribute to the work that it is so effective.

Demonstrations of the permeability of the field keep surprising me, even though I know that the field IS permeable. When I’m doing a private session with a student, and that student starts having experiences that exactly echo what I have just been studying by myself, it still feels like magic.

I was surprised recently by my ability to confront someone, and to say with ease and lightness and even humor, the kind of thing that has been impossible for me to say most of my life. The words just came out of my mouth, and I didn’t realize what I’d said until I had already said it.

What advice/encouragement would you offer to someone ‘on the fence’ about attending an Intro event?

I wouldn’t try to say anything whatsoever that would pressure them one way or another. I would try to elicit what was going on with the person, so they could discover for themselves what they wanted.

If you could have one wish for humankind, what would it be?

I could say that I wish for more kindness, tolerance, and understanding. But I’m also acutely aware that I don’t know what should happen, how things should go. 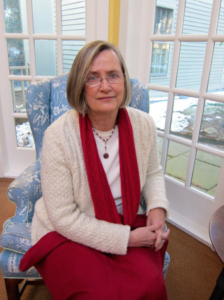